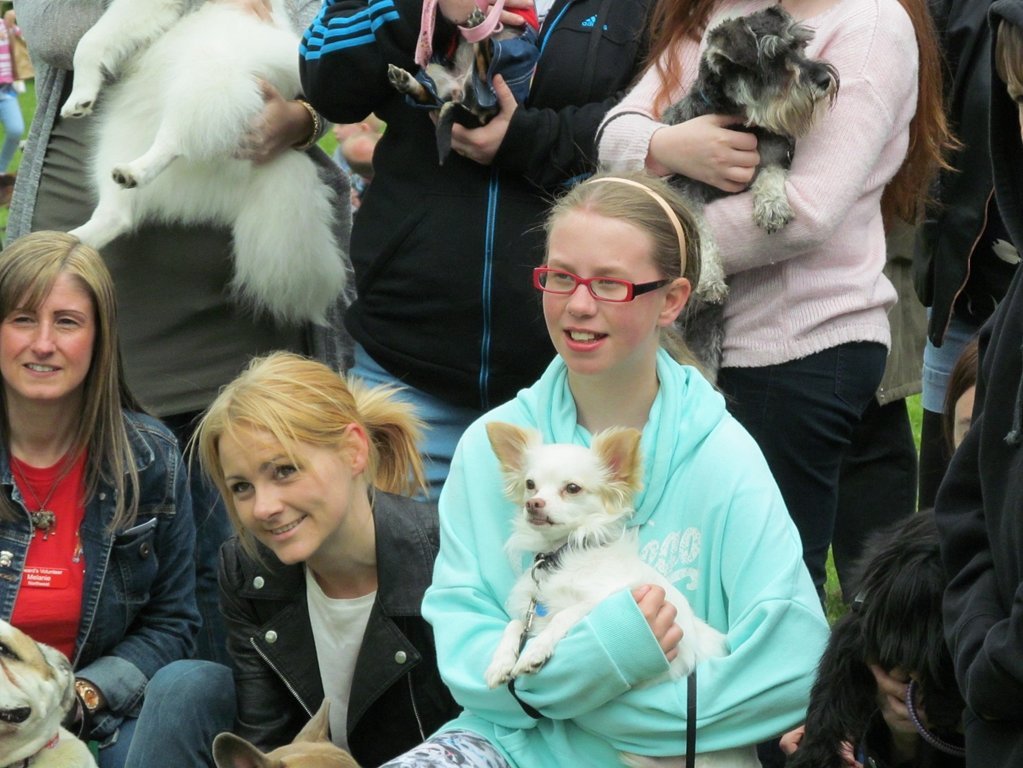 Barking Berry's Bakery was created by then 8-year-old Scarlett Berry in 2011 to raise funds for animal rescue. Scarlett began by baking her own dog biscuits and selling them for charity. Since founding her bakery Scarlett has now raised some £30,000 (£30,000) by selling her treats, taking part in sponsored events, having a presence at animal events across the north west, doing online auctions, as well as organising her own Fun Dog Shows, Doggy Afternoon Teas and Christmas Fairs.

Scarlett is a passionate advocate for animal welfare and an active fundraiser for local animal charities. She also finds time to volunteer at an animal centre in Ireland during school holidays. She has gained a high profile for her activities including Fun Dog Shows at Westhoughton's Central Park, which seem to get bigger and better with each passing year, attracting considerable interest from the media, and showing Westhoughton in a good light.

Supported by her family, and making good use of promotion across social media, radio and press, local networking (including presenting at Westhoughton Community Network meetings), and posters and flyers, the enthusiasm, passion and love for animals shine through. An extremely impressive feat for someone so young, also coping with the normal activities of a busy schoolgirl growing up. 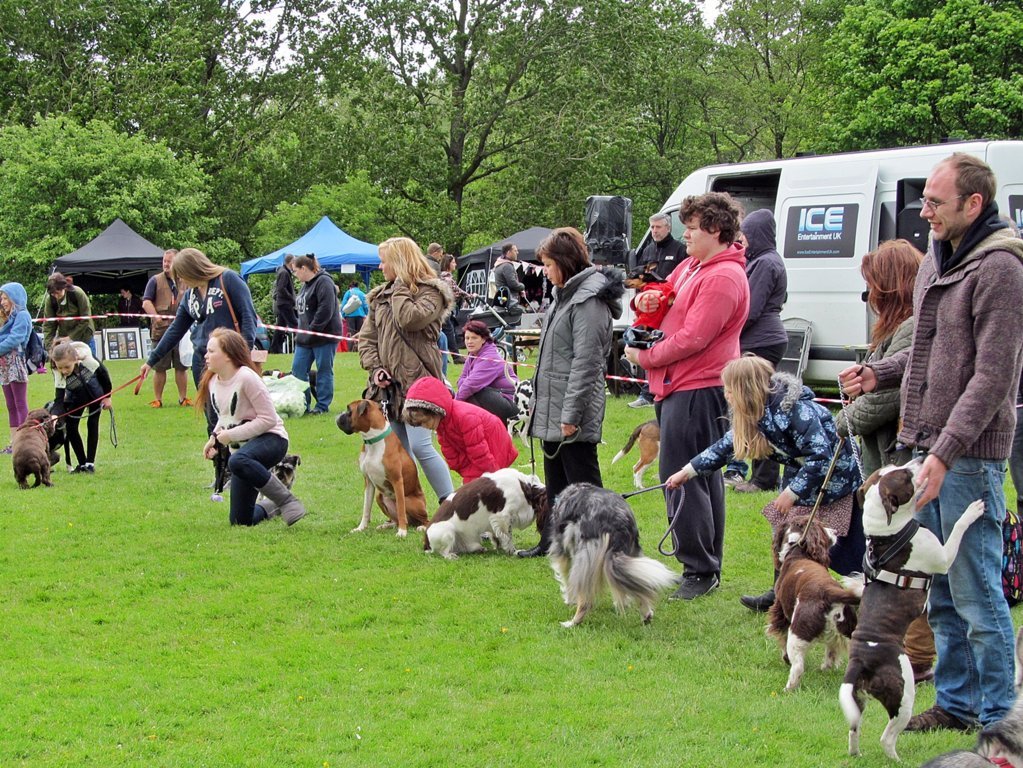 From small beginnings, this was the 5th annual Barking Berry's Fun Dog Show, taking over the whole of the upper field at Central Park (accessed from Bolton Road or the park itself). 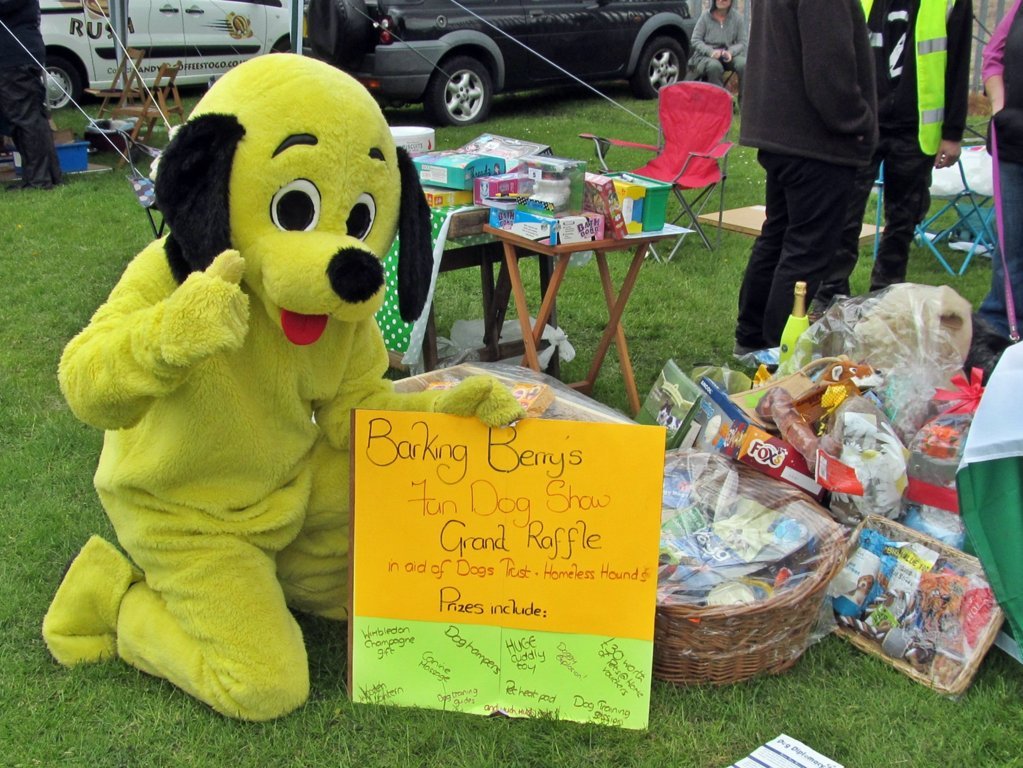 A day of typical British weather, spirits weren't dampened as people and their pets turned out in the 100s, steadily throughout the day. There were over 40 stalls, including several animal rescues, as well as craft stalls, refreshments and games. The event is a source of information and a way of raising awareness of animal charities and issues. There is a raffle with some great prizes. The 'Dog Show' itself with its 15 classes is an entertaining spectacle - dog owners can enter their own dogs for a small donation. A couple of doggy challenges such as 'Distraction Alley' and an 'Obstacle Course' provided further fun entertainment.

Entertainment and commentary was ably provided by the Howfen Radio team.

The 2017 event is in aid of Rochdale Dog Rescue and Dogs Trust Merseyside. 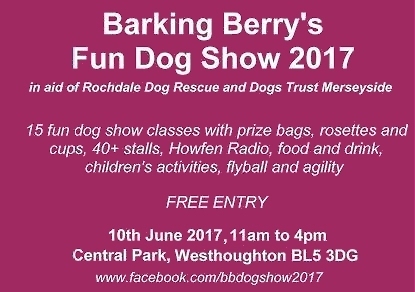 For latest news visit the

Facebook group; for information about having a stall or for media enquiries email the Barking Berrys.

An event that is extremely popular and a great day out for the whole family, raising money for animal charities. Scarlett, Sarah and Martin are very grateful for the ongoing support.

Update (10/6/17): After expenses the 2017 Fun Dog Show raised £1,564.45 for Rochdale Dog Rescue and Dogs Trust Merseyside. A further £82.50 for Animal Heaven Animal Rescue (AHAR, Ireland); extra donations for this cause received on the day.

In total £2350 was collected on the day with other charities being able to promote themselves and raise money at the event. The total amount of money raised by the Barking Berrys is some £30,000 over its 6 years in existence.